About 20 years ago, a handful of dime-sized insects spread their proverbial wings, hopped aboard a few shipping containers in China, and made their way to American shores. Known as emerald ash borers, these invasive insects have inflicted considerable harm on North American ash trees, placing the entire ash tree genus (Fraxinus) in danger of extinction.

What Are Emerald Ash Borers: Know Your Enemy

The insects themselves are relatively unassuming, and – were it not for the horrific damage they caused – you may even consider emerald ash borers pretty. These ½-inch-long insects have a fairly typical, beetle-like build, although they’re a bit longer and leaner than ladybugs or June beetles. As their name implies, they’re bright, metallic green in color, and they have two rather large eyes on the front of their heads.

Emerald ash borers have a fairly straightforward lifecycle, which begins when newly metamorphosized adults emerge in the spring. The adults quickly venture up into the canopies of ash trees, where they dine on the tree’s foliage. A week or two later, the adults will begin mating, with egg-deposition occurring shortly thereafter. Females who avoid predators and disease may live for six weeks or more, during which time they’ll deposit 50 to 200 eggs.

The eggs are typically deposited in the bark and other nooks and crannies of ash trees. A short time later, the eggs will hatch, freeing the larvae contained inside. These hungry larvae will immediately begin tunneling through the bark of the trees in an effort to reach the edible phloem, cambium and outer xylem layers of the tree. While feeding and passing through four developmental stages called instars, the larvae will carve out elongate tunnels. It is these tunnels which cause the bulk of the damage to the tree, as they disrupt the trees ability to ferry water and other resources between the canopy and root system.

By fall, most of the larvae are ready to pupate. To do so, they’ll carve out a pupal chamber in the tree’s wood, which will serve as their refuge while they complete development and become adults. Once winter passes, the adults begin to emerge and start the lifecycle anew.

Unfortunately, a variety of ailments can afflict ash trees, so you’ll need to learn to identify some of the most common signs and symptoms of an ash borer infestation. This is the only way to have a good chance of stopping the insects and preventing them from damaging your trees.

Generally speaking, you can look for three different signs of emerald ash borers:

If you notice any of these symptoms, immediate action must be taken to rid the pest and prevent further destruction. Because these insects are considered an existential threat to ash trees, your local extension service or forestry department may have resources available for you to consult.

Unlike some other tree pests and pathogens that cause minimal to moderate damage, the emerald ash borer is a serious threat that can cause rapid decline and death. Young or stressed trees may succumb in as little as a season or two, while even robust, mature trees may die within 4 or 5 years.

Accordingly, you’ll need to remain vigilant and take prompt action anytime you suspect these insects are attacking your ash trees. Fortunately, with quick and proper action, treatment strategies are often effective in 85 to 95 percent of cases.

A basic treatment regimen would unfold as follows:

There are a variety of insecticides approved for use against emerald ash borers, many of which are available for use by homeowners. If you’d like to control the insects yourself, you will typically need to use an insecticide designed to be applied to the soil. Imidacloprid and dinotefuran are the two best options, and they’re designed to be applied in early or late spring, respectively.

If you only have one or two trees, and do not want to deal with mixing concentrates and using gallon sprayers, Bayer’s BioAdvanced product is phenomenal. 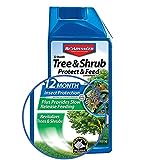 However, ash trees can grow very large. For every inch the tree trunk is in circumference, you need to apply an ounce of BioAdvanced. The bigger the tree, the more product you need to apply, and this can get expensive really quickly. If you have multiple large ash trees, I highly suggest going with a concentrated systemic insecticide like this:

Emerald ash borer adults typically lay their eggs in trees that are within about 100 yards from the tree in which they developed themselves. Accordingly, trees that don’t respond to treatment or have already died from an infestation should be removed (such trees also present a safety hazard when they occur near buildings or places in which people congregate).

Once the trees are removed, they should be disposed of in a manner that precludes them from leading to further infections. Some states have regulations regarding this disposal in place, so be sure to consult the relevant authorities before transporting the wood left over from removed trees.

3. Protect Your Property From Infestation Sources.

It is thought that the movement of wood – including firewood – from place to place is a significant method by which emerald ash borers spread throughout the land. Given that these insects are thought to have killed nearly 60 million ash trees in a little under a decade, this is not a threat to take lightly.

This means that you’ll want to prevent friends or family from bringing firewood or any type of ash tree debris to your property. In fact, doing so is currently illegal in some areas. If the wood material contains pre-emergent adults, it could lead to further infestations.

The emerald ash borer is certainly a significant threat to ash trees in the midwestern United States, and within a short time, they’re likely to threaten those in other portions of the country. This is part of the reason all property owners share some responsibility in preventing the spread of these invasive insects.

Just be sure to inspect your ash trees regularly (particularly in the spring) and initiate treatment or solicit professional help at the first sign of trouble.

Emerald ash borers are clearly a threat to America’s ash trees, which causes homeowners and tree lovers to have a lot of questions. We’ll try to answer a few of the most pertinent examples below.

When is the best time to treat trees for emerald ash borers?

Deciding the best time to treat emerald ash borer infestations requires a bit of finesse. Treat them too soon or unnecessarily, and you’ll just be wasting money and pouring insecticides into the local watershed for no reason; treat them too late, and the infection may already have progressed, rendering insecticides ineffective.

Nevertheless, most emerald ash borer treatments are designed to be applied in the spring, although different products are best used in slightly different time periods. Accordingly, you’ll always want to follow the directions on the product label.

Is it too late to treat emerald ash borers once symptoms are present?

No – you’ll typically want to start treating trees for emerald ash borers quickly after discovering an infestation, but you’ll usually notice symptoms first. If you’re unsure, consult a tree-care professional to be sure.

Where did the emerald ash borer come from?

The emerald ash borer is thought to have originated in China. Interestingly, it is a relatively poorly known species in its homeland, which hasn’t been studied extensively by scientists.

Is the emerald ash borer a problem in its homeland?

Part of the reason that the emerald ash borer has gone largely unstudied in its native land is that it doesn’t cause many problems. Though scientists do not know the exact mechanisms that limit its spread (such as parasites, natural host-tree immunity, or predators), the damage caused by the insect appears to be relatively self-limiting and negligible.

If you know emerald ash borers are in your area, should you use a preventative treatment?

Some authorities recommend a very proactive approach to emerald ash borers, given the catastrophic harm the bugs can cause. Conversely, others – primarily concerned about the unnecessary use of pesticides – prefer to wait until absolutely necessary to begin treatment. You’ll simply have to consider your personal views, the number of ash trees in your yard, the relative value you place on your ash trees, and the recommendations of your local forestry officials to make a decision.

How can you prevent emerald ash borers from afflicting your trees?

While you can reduce the chances of emerald ash borer infestations by keeping firewood and other potential vectors away from your property, there’s no way to completely eliminate the threat these insects pose. This is part of the reason officials and tree-care professionals take this threat so seriously.

Where are emerald ash borers most likely to lay eggs?

Emerald ash borers tend to deposit their eggs in small, sheltered areas of the trunk or primary branches of ash trees. And while you can’t make your ash trees completely unappealing to egg-laying adults, you should have trees with damaged bark, cankers or other bark imperfections assessed by an arborist, as these types of places can be especially attractive to emerald ash borers.