Beloved by young children who enjoy blowing their seeds in the wind but despised by those who tend to their gardens and yard, dandelions are arguably the most well known weed on the planet. Ridding them from a home lawn is not difficult but requires an understanding of the plant and its somewhat unique growth cycle.

Every Sunday Smart Lawn Plan is based on your specific soil, climate, and lawn. Plans even include a soil test to zero in on any soil deficiencies. Everything is mailed to you exactly when you need to apply it, and it’s as simple as spraying a hose.

Somewhat confusingly, the term dandelion refers not to one specific plant but to the genus taraxacum, a large group of plants that contains several dozen species and sub-species. Native to various parts of the Northern Hemisphere – including Europe, eastern Asia and North America – dandelions have been brought all over the world and are now common in virtually every country. The dandelion most often found in American lawns likely originated in what is now the western United States or Canada, but dandelions also arrived from Europe with settlers who used them to make medicinal tonics or teas and utilized their leaves as culinary herbs.

Dandelions are perennials, meaning that the same plant will appear in the exact same spot year after year. They grow from strong and deep-reaching taproots which are usually about six to nine inches in length but can grow as long as eighteen inches. These taproots produce crowns which in turn produce bunches of notably serrated leaves; it is these serrations that give the plant its name as the word dandelion is from the French dent-de-lion or “tooth of the lion.” From the center of these bunches hollow flowering stalks emerge. This happens most commonly in the spring and less commonly in the early fall, but in places below the frost line dandelions can flower year-round. The brilliantly yellow dandelion flowers  eventually dry out and fall to the ground which exposes the seeds that lie beneath them. Wind spreads these seeds, and while strong gusts can take them as far as five miles away, most end up in the same yard they began in. As dandelions can flower and go to seed multiple times in the same season, they can prolifically spread when not controlled. Cold temperatures during fall will slow their growth, shrivel their leaves and cause the plant to retreat but all but the most immature dandelions are able to overwinter and emerge again the following spring.

Virtually everyone can pick out dandelions – they are probably the easiest of all weeds to identify – but there are some interlopers that can be mistaken for them. These include cat’s ear, which has notably hairy leaves that are easy to distinguish from dandelions’ smooth ones, desert chicory whose flowers are notably paler in color and hawkweed which has solid, not hollow stalks.

While dandelion leaves can make for tasty though somewhat bitter greens, if salads or braises are your goal, it is best to purposefully grow dandelions from purchased seeds in a designated part of your yard. In home lawns dandelions can crowd out desirable grasses and should be removed.

The best way to prevent dandelions – or any other weed, for that matter – is to have a thick and healthy lawn. Dandelions require sunlight and heat in order to flower so crowding them out with grass and mowing that grass as tall as as your particular type allows will inhibit their development and appearance in the yard.

Dandelions can grow in nearly all soil types but they favor well-fertilized ones that contain lots of nitrogen and potassium. However, because desirable grasses also favor these conditions, leaving your lawn unfertilized is not an effective means of preventing them; doing so will ultimately lead to thin, weak, and unhealthy lawn that is far more susceptible to weeds. Dandelions do take a particular liking to soils that are low in calcium. If a soil test indicates that your yard has less than optimal amounts of calcium, adding some will certainly help prevent dandelion growth.

Pre-emergent herbicides can also be helpful in preventing dandelions. Dithiopyr, perhaps better known by its brand name, Dimension, is the best option and the only common pre-emergent explicitly labeled to prevent them. 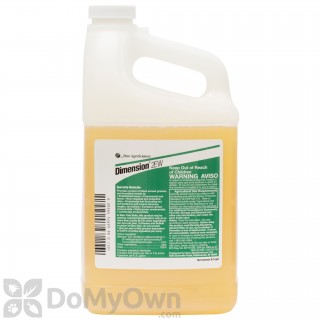 Dimension Herbicide is a specialty selective pre-emergent herbicide formulation that provides powerful control of grasses and broadleaf weeds in turf, over the top of field and container-grown landscape and nursery ornamentals without harm. Dimension 2EW Herbicide is water-based and contains 2 lbs. of the active ingredient dithiopyr per gallon.

Anecdotal evidence suggests that others, including prodimaine, will also do the job, but no academic research that I am aware of has established this. To prevent dandelions, pre-emergents should be applied in the late winter or early spring as soil temperatures approach 55°F.

Corn gluten meal is often touted as a natural way of preventing dandelions and other weeds. However, as I discussed in my post on crabgrass, results are very inconsistent with this product. Moreover because to corn gluten meal contains a large quantity of nitrogen, applying it amounts to blasting your lawn with fertilizer, something that is neither advisable nor environmentally responsible in early spring.

There are no natural herbicides that are effective at killing dandelions. Household vinegar and baking soda mixtures won’t affect them at all. Horticultural vinegars will provide some aesthetic relief, as they will damage the leaves and stalks but will not eliminate the plant. Such vinegars also require careful handling, if spilled on the skin they can cause serious burns within seconds.

The only natural method for removing them from a home lawn is to pull them. For some, this is an enjoyable practice and I admit that there is something satisfying about pulling a deeply rooted dandelion from the ground. However, the issue with hand-pulling is those very roots; because they are so long it is very easy to break them off when pulling them from the ground. Dandelions are indefatigable weeds, if even a single inch of their root is left behind they can regrow in their entirety and return to the lawn.

A good weeding tool will increase your odds of getting the entire plant and not leaving any roots. A strong, forked tool is a good option for small lawns or for those on a budget. A stand up weed-puller is a better option for those with many dandelions or larger yards.

How to Get Rid of Dandelions

Step 1: Get the right products and tools

The most effective way to kill dandelions is with an herbicide. Luckily, dandelions are susceptible to many different herbicides. The best option is to employ an all-purpose blend of herbicides – sometimes referred to as a three-way or four-way blend – that is appropriate for the type of grass in your lawn. For cool season lawns – those that contain rye, bluegrass or fescue – SpeedZone is my go-to. Not only is it it potent, but as the name suggests, it also works quickly. Perhaps more importantly, its specific formulation allows it to be effective when temperatures are cooler in the early spring, a time when many dandelions first emerge. Trimec Southern is my go-to for warm season lawns – those that contain bermuda, zoysia, centipede or St. Augustine. However, Trimec Southern is not safe on Floratam St. Augustine or bahiahgrass. For those grasses, I would recommend using Dismiss to kill dandelions.

While some herbicides are sold in ready to spray containers, most – including the three I recommended above – will require a sprayer. For small lawns, a simple one or two gallon hand pumped sprayer will suffice. For medium to large sized lawns, a backpack sprayer is the way to go. For truly enormous lawns a tow-behind or push sprayer will be required. Make sure to equip any sprayer you purchase with a fan-tip nozzle appropriate for spraying weeds.

There are granular herbicides on the market, commonly packaged with fertilizers and sold as “Weed and Feeds.” I do not recommend these. While they seem easy to apply, they are anything but. In order to be effective the lawn needs to be damp enough that the granules stick to the weeds but not too damp that they slide off. Then the yard must be kept still long enough for the granules to dissolve and for the weeds to take in the herbicide. This is hard to do in most home lawns where wind, kids, pets and wildlife abound. What often ends up happening is that some granules stick to weeds while most others fall off and end up lost in the soil.

Herbicides should not be sprayed when rain has either just occurred or is predicted to occur within 24 hours of the application. The lawn should also not be mowed for two days before or after spraying.

Spraying herbicides can seem intimidating to a beginner but it is ultimately a simple task. Herbicide concentrates should be mixed with water as per their label’s instructions. None of the three herbicides I recommended require additional surfactants or adjuvants. However, using a marking dye can be very helpful in identifying which areas have been sprayed and which ones haven’t.

Lawns that are filled with dandelions and other weeds can be sprayed in their entirety, a practice called broadcast spraying. Ones with fewer weeds should be spot sprayed. When broadcast spraying, a set amount of herbicide should be diluted in a set amount of water – both will be indicated on the product’s label – and spayed evenly over the entire lawn. When spot spraying, herbicides should be sprayed only on areas where dandelions are. The weeds should be sprayed until damp but not to the point that they are dripping . More is not better in this situation as excessive amounts of herbicide can damage desirable grasses.

Dandelions sprayed with herbicides will begin to wilt in roughly three or four days. Ultimately they will turn yellow and then brown. Because they are unattractive as they die, it will be tempting to pull them but this should not be done. Because dandelions have such a long taproot it can take several days and potentially up to two weeks for the herbicide to kill them. Pulling them too early can prevent a complete kill and lead to the restablishment.

Shouldn’t we leave dandelions for the bees?

It is commonly held that dandelions are the “first” food for bees in the springs. This is a myth. In early spring bees will visit tree blossoms and other flowers before they visit dandelions. In fact, while bees will occasionally drop dandelion flowers, they are preferential to hundreds of other plants. Evolution has likely driven this preference as dandelions lack four essential amino acids that bees require. If one seeks to provide options for bees, planting lavender, heather or hyacinth in flower beds will do much more than will letting dandelions grow in the lawn.

When do dandelions bloom?

How long do dandelions live?

Dandelions can live up to ten years. The older they are, the thicker their taproot will be and the more difficult they will be to pull and the longer it will take to kill them with herbicides.

How can you keep dandelions from spreading?

Dandelions do not spread via stolons – above ground growth – or rhizomes – below ground growth. The only way for to establish new plants is via seeds. But because they are such prolific seed producers, their growth can rival weeds who spread stoloniferously or rhizomatously. Stopping their spread is a matter of getting them out of the lawn before they go to seed.